The Atlantic City Fire Department is the first established fire department on Absecon Island and enjoys a long tradition as a leader in South Jersey, particularly in Atlantic County, for being at the forefront in the implementation and use of the latest equipment and fire fighting techniques available. This tradition will continue as our Training and Special Operation Divisions adjust and adapt new techniques to address the ever changing physical landscape that is Atlantic City.

It has always been the fire departments philosophy (mission) to be a neighbor in the community we serve. In an on going effort to remain a part of the community the ACFD performs many community services. These services in Operation Safe Place for at risk children, Public Education Seminars, Free Smoke/Carbon Monoxide Detector Program, and various charitable fund raisers just to name a few.

The ACFD is committed to providing the highest standard of service and safety to the residents of and visitors to the City of Atlantic City. If you have any questions and/or suggestions please feel free to contact the Fire Chief’s office directly or any of the divisions as listed on the site. 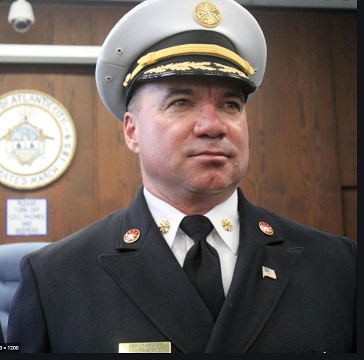 Fire Chief Scott K. Evans began his fire service career in December of 1987 when he was 22 years old. He graduated the Atlantic City Fire Academy in January of 1988 and began working his way through the ranks.  On September 1, 2015 he was appointed Acting Chief over the department, and after scoring # 1 on Civil Service test, soon after he was appointed Fire Chief on January 12th 2016. Chief Evans brings many technical skills to the position of Fire Chief, as he has served in many diverse units and his portfolio that reaches across all disciplines in Public Safety, including Technical Rescue, Fire Suppression, Hazardous Materials, Fire Investigations, Health & Safety, Strategic Planning, Fire Training Academy, Special Operations, Officer Training and Labor Relations, EMS, and Incident Management. He has been a Fire Service Instructor for over 26 years, training many career and volunteer firefighters at the Atlantic County Fire Academy. His education also includes attending Camden County College Fire Science Program, certified as a New Jersey Certified Public Manager, and is the New Jersey Office of Emergency Management, Emergency Manger 1. Chief Evans also hold the position of Atlantic City Emergency Management Coordinator for Atlantic City. Chief Evans is one of the original founding members of the New Jersey Urban Search and Rescue Team, which is now a FEMA certified team that responds nationwide to natural and manmade disasters.  He began training with NJTF-1 in 1997 and rose through the ranks becoming Task Force Leader in 2009, which he remained through 2018.  He currently stays active as a Safety Officer for the team.

Chief Evans’ career has been strongly focused on firefighter training, departmental training program management, and building training and leadership platforms for several fire agencies. He is a strong believer in the power of an organization’s mission, vision and values, and frequently provides presentations on shared vision and inspirational leadership for both fire and non-emergency service agencies. Chief Evans has made it a priority for team members to share in organizational vision and to take ownership of the organization’s values and mission creation, continuously focusing on the fire service spirit of service.

Chief Evans is well respected by both firefighters and officers of the Department and is known for his expertise in Special Operations and Training.  Chief Evans’ top priority is health and safety, while improving the apparatus fleet for the Department. His plans are to work with the Mayor, City Council, and Firefighters’ Union Local 198 to do everything possible to make sure all of our personnel go home safely to their families and live a long & healthy life.